Paths through these levels:


I've got the following code: 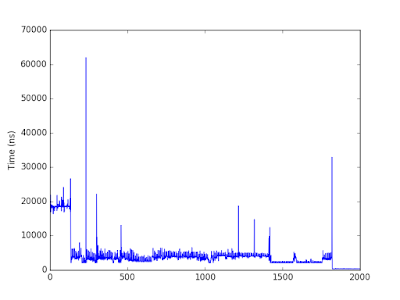 I ran the code with -XX:PrintCompilation and I'm using Java 8 so tiered complation is enabled by default.

Let's see what is happening to the rawr method:

What does this mean?

i (ith iteration of my for loop which is on the x axis) = 90
timestamp since vm start = 164
this method was 171st in the queue to be compiled
% indicates on stack replacement (method contains a loop)
3: This is the most important bit! This means we are moving into C1, ie doing the first compilation.
50 is the bytecode index of the loop.

This is basically saying that the level 3 version of the rawr method shouldn't be used any more (correct because we should now use the level 4 version). We can see this dip in the graph at x = 1818.

At the very end of the method Rawr main is over so the level 4 version of the compiled code is made not entrant (ie nothing should 'enter' or call that compiled code).

Note that the ! indicated that the method contains a try catch loop.
at June 26, 2016

I'm studying the 'Scala with Cats' book. I want the information to stick so I am applying a technique from 'Ultralearning&#...